This history of Kennicott began in 1900, when “Tarantula Jack” Smith and Clarence Warner spotted the green glint of copper ore in the mountains above the Kennicott Glacier.

Soon, Kennicott became a boom town where 600 people worked to mine what was then the richest known concentration of copper ore in the world.

The mine was abandoned in 1938 but many of the historic buildings still stand as they were on that last day, leaving a living history of those rugged days of high adventure.  The National Park Service purchased the town in 1998 and began an extensive restoration and stabilization project.  Many of these buildings are open to the public during the day and several include newly installed displays to help visitors learn about the history of Kennicott.

Guided tours into the mine buildings are offered by St. Elias Alpine Guides, whose knowledgeable guides will bring to life the miraculous story of this world-class copper mine. *Please note that due to renovation efforts, the 14-story Mill Building will most likely be closed to the public for Summer 2021.

You can learn more about Kennicott at the National Park Service Website. 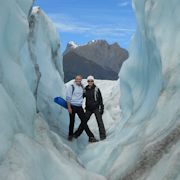 I would just like to say thank you for our wonderful experience at your lodge. It was amazing to stay there. You guys really know how to run it right!